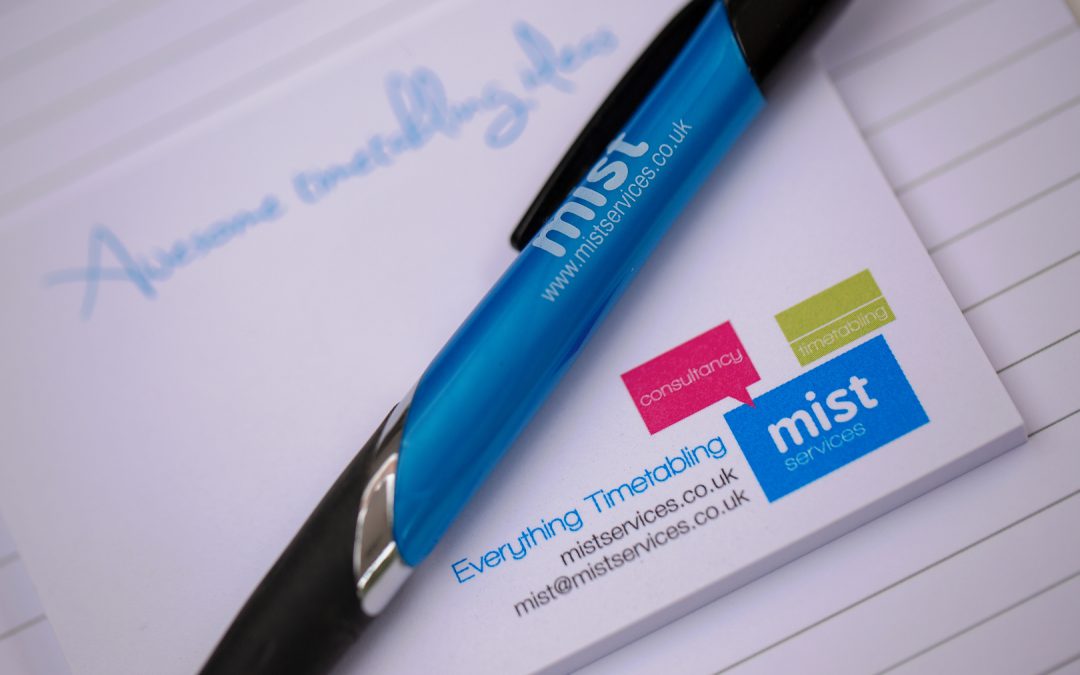 Re-writing a timetable mid-year, is it a good idea?

Any thoughts or comments are welcome – just email mist@mistservices.co.uk

We are going to take a slight sidestep from previous articles as we have had quite a few enquiries from new schools about re-writing their timetable, which we must say upfront isn’t necessarily a good thing to do!

You may be a school that has a functioning timetable, but you aren’t completely satisfied with it and feel the solution is to re-write it!

Firstly, there is no such thing as a perfect timetable as it all depends at what angle you are looking at it from!  Each year at MIST Services we’ll get an enquiry from a school in towards the start of term who want to re-write their timetable!  The reasons they want to do this is typically fall into the following categories:

The enquiry comes along the lines of can MIST Services help in correcting these things.  As with a lot of things the answer isn’t straight forward.  Of course, we can look and analyse your timetable to see where the ‘problems’ are but is there anything that can be done about it is a really challenging question to answer.  The simple answer is it depends on how much disruption you are allowed to make and even then; the solution might not be perfect.

Too much split teaching – firstly there are very schools who don’t have some level of split teaching (shared teaching).  It’s important to understand the why.  For some schools they intentionally share groups at say A-Level, or Music at GCSE might be shared because two teachers have different skillsets that students need to be exposed to. Or an in-experienced History teacher is sharing a GCSE group with an experienced teacher so that they can have experience of teaching at that level.  Or it may be as simple as to keep a teacher within their maximum teaching load let’s say a Maths teacher can teach up to 18 periods and maths get 4 curriculum periods in each grade then that teacher can only take 4 groups unless involved in a ‘share’.  I would class all the above as ‘understandable and acceptable’ as it is in essence by design.  The problem typically comes when a teaching group is ‘split’ to get the timetable to work.  Without going into the reasons (read previous articles), splitting a group usually gives more scheduling combinations and hence why it solves the problem.  It’s important to understand that the ‘computer’ hasn’t split the group on your behalf so it shouldn’t come as a surprise where the un-planned split groups occur.  The question really is; was it absolutely necessary or is it as a result of the scheduling that has been completed previously?  If it is a ‘layering’ issue and the split group isn’t acceptable, then un-pick your timetable to a point where the group can schedule without splitting, even if it causes one or two compromises elsewhere in the timetable.

Spread/balance of lessons – many things fall into this category but typically they are students are getting two lessons of subject x on the same day or a group has an uneven balance in a two-week timetable.  For example, both Drama lessons in Week B.

Let’s take the two lessons on the same day situation, if you have five singles of Maths for Year 7 (on a one-week timetable) then typically the software will have a 1-per day setting/rule which means Year 7 Maths will want to be scheduled on each day of the week.  So unless this setting is relaxed then two lessons of Maths won’t be on the same day.  It may well be that Year 7 Maths has a teacher who doesn’t work on a Friday so fitting 5 lessons into 4 days is impossible!  These obvious situations should be highlighted before scheduling starts and you need to decide (ok chat with your head of maths) is it really important to have maths on each day, if the answer is yes then the maths teaching group gets split on a 4:1 (but read above about split teaching).  If the subject leader says split teaching is not acceptable then they need to decide on the day where they have two lessons of maths; should it be a double period or two singles on the same day and as far away as possible to each other!  Once again multiple lessons in the same day might be inevitable given certain constraints.  At times the solution to a problem is to break the one-per day rule but you are in control of this.

In respect to spread/rhythm of lessons over a two-week (10 day) timetable is often hotly debated and certainly not looking to explain the different types of two-week timetables here (that’s another article) but let’s take a simple example.  Class 8A/Dr get two singles over the fortnight, and they are scheduled as follows:

The teacher points out to you that all 8A’s Drama is in Week A and that’s un-acceptable.  So, with a bit of time, you realise you can change the timetable so that the Drama is scheduled as follows:

Brilliant, you’ve met the criteria of one lesson in Week A and one in Week B, but which is the better rhythm?  Lots of people would say the original.

Before embarking on any re-write take half an hour to list out the ‘problems’ and order them in ‘priority’ order.  With this list you can then start to understand if the problems are concentrated with specific teachers, subjects, years etc

On the assumption the above list is warranting a re-write it is probably just that a complete re-write as if the problems are big enough problems, then a little tweak is very unlikely!  But even re-writing a timetable mid-year doesn’t guarantee a vastly better timetable, in fact for some schools it might produce a timetable with other ‘problems’.  Some of the reasons re-writing mid-year is problematic are:

So, in summary, before you embark on a re-write take a step back and prioritise the problems and understand if there was a reason ‘why’.  If you feel there is too much split-teaching, then is that maybe down to how the timetable was constructed; schedule the lessons without staff and then ask subject leaders to staff later?  If a re-write is warranted then it goes without saying please leave yourself sufficient time to actually complete the task!

Any questions please just ask or more information about the services we offer please click your software solution below.